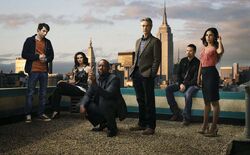 Awesome news Alphas fans! The summer hit Alphas is getting renewed for a second season! The second season will air in the summer of 2012 with thirteen new episodes. Have you been watching the first season? It's a great time to catch up; Alphas has brought its A-game with a slew of impressive sci-fi guest star names!

I wonder which stars will grace Alphas next summer! Are you excited about the renewal? What do you think of its freshman season?

Retrieved from "https://alphas.fandom.com/wiki/User_blog:Kate.moon/Breaking:_Alphas_Renewed_for_Season_2?oldid=5403"
Community content is available under CC-BY-SA unless otherwise noted.