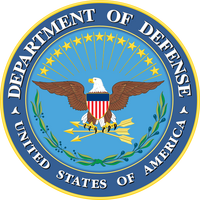 The United States Department of Defense (or DoD) is the largest budgeted part of the U.S. federal government, encompassing the entire U.S. military, including the armed forces, as well as military research and intelligence. For an undetermined amount of time, the DoD has had an interest in the Alphas phenomenon, possibly including research salvaged from the CIA MK-Ultra Project. They run the Binghamton Special Research Facility and fund Dr. Rosen and his group, under the umbrella of the "DCIS." They have also used Alphas through subdivisions of the Department, include Skylar Adams' work to develop an advanced processor for the NSA.

Known Agents of DoD connected to the Alpha phenomenon:

Retrieved from "https://alphas.fandom.com/wiki/Department_of_Defense?oldid=10265"
Community content is available under CC-BY-SA unless otherwise noted.